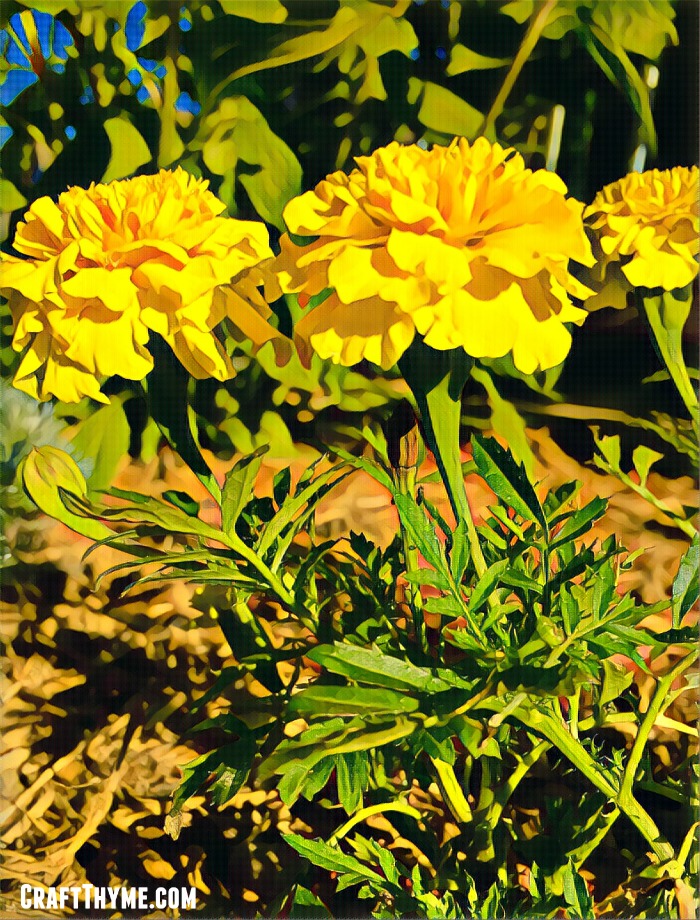 Grow Marigolds… Let’s be honest, marigolds seem kind of out-dated. Yellow or orange balls of flowers you can get for $1 at big box stores. Sure they add some color, have a slightly strange scent, and weather neglect pretty well, but in reality they are just kind of the bland work horses of the garden. They are like the grandma of flower gardens and I resisted growing them for years!  Except they AREN’T outdated; marigolds are awesome!

First, let’s just discuss the plant itself. Marigolds (or Tagetes for you Latin purists) are native to North and South America. Many of flowers in American garden’s are not usually native, so if you are from North or South America you should get some gardening brownie points just for using a native. Marigolds come in both annual and perennial varieties, though, most of the varieties you can get in the big box stores are going to be annuals.

That funky smell? BREATHE IT IN!  Well in some varieties it has been bred out, so if you don’t like it do not despair!  You can find a marigold that suits your sensitive nose. I, however, want that smell. You know why? It makes marigolds unattractive to predators (deer, bugs etc). In addition it ends up making plants grown next to them unattractive. So grow next to your tender cabbages, tomatoes, etc. Just keep it away from your legumes as marigolds have been known to interfere with their growth.  I have personally found the numbers of aphids and other pests tend to be significantly smaller on veggies and fruit surrounded by these lovely yellow and orange marigolds. 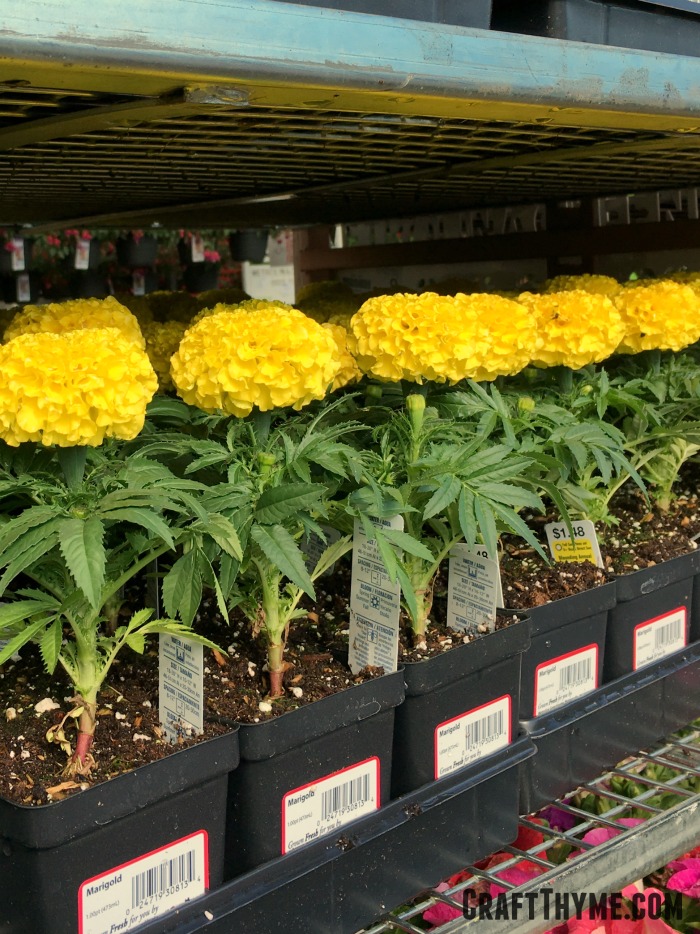 Marigolds are used to flavor and to color dishes in South America. They are also used in many Hindu religious ceremonies. I saw tons of them used in Holi to make beautiful garlands and necklaces. They are also often used to celebrate the day of the dead in Mexico. It is said you can feed marigold flowers to chickens to increase the color of their yoke. I have yet to try this experiment but I might this next summer and let you know how it goes.

How to Grow Marigolds

These flowers are perfect for first time gardeners. They will grow in almost any soil, deal with fluctuating water, and are very pest resistant. They grow easily from seed, which is why so many teachers send kids home with marigolds around Mother’s day.

Basically a marigold is as close as you can come to a pretty flower that needs minimal intervention.

Plant after danger of frost, as most marigolds prefer nice warm weather and full sun. Most Marigolds will sprout from seeds in 1-2 weeks. You can expect flowers to show 1-3 months after planting seeds. They do wonderful as starts you can transplant out or directly seeded in the ground. Transplants can get you blooming in late May to early June. Expect direct seeded to get going late June to Early July.

If you are buying marigold plants I like to pick plants with only a few open flower buds, so I can get the first good show of flowers after it acclimates to my soil. However, since most varieties will re-bloom feel free to grab a marigold with open flowers for instant color in your garden.

For the best blooms you will want good, well draining soil with a high organic content (really what plant doesn’t like that). Regular watering that allows it to dry in-between is preferred. As the blooms die cut them back (dead head) and it will bloom more. You can expect most commercial varieties to bloom from spring through to frost. As long as you cut off the old blossoms. 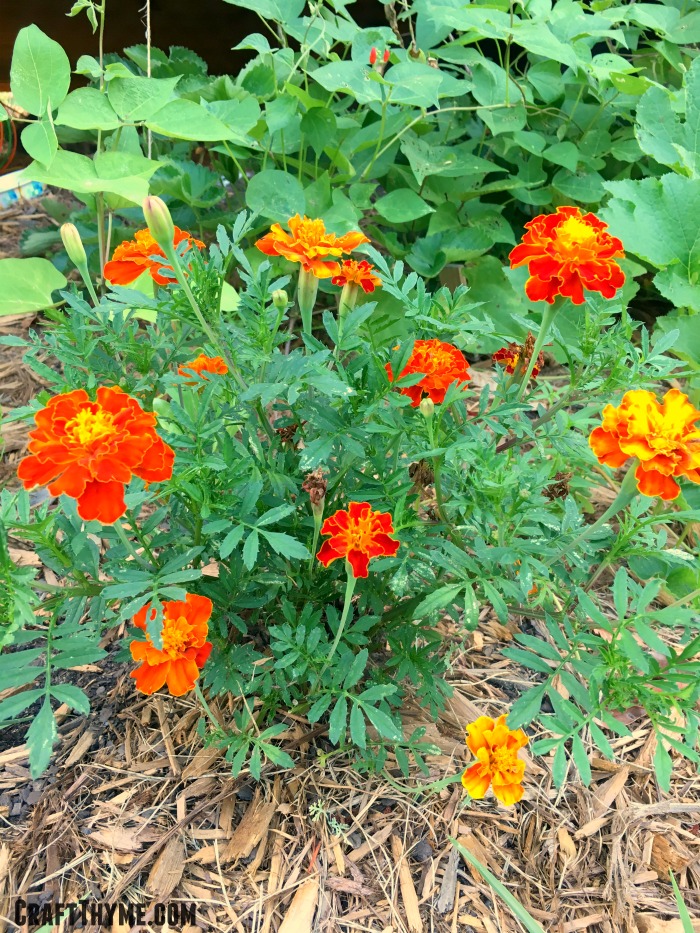 Now to the Good Stuff

Marigold varieties! There are way more choices to be had than one would realize.  Which is why i saying growing marigolds is no longer just the business of little old ladies and elementary school children. You can pick plant sizes that go from tiny 6-12 inch to some truly spectacular varieties that grow more than 5 feet tall. I think most of us have seen the plain yellow and orange marigold varieties, but did you know you can get your hands on an almost white one? Green tinted Marigolds? How about an orange so dark it is almost red? Stripes? Ball shapes, daisy shapes, tiny florets, two toned petals? Marigolds have all of these and more.

I am personally trying some adorable teeny-tiny yellow marigolds this year from Sow True Seed. (affiliate link to follow) These lemon gem flowers should be showy in the new raised beds.

So expand your gardening past the basic ball shape and add some low growing varieties to drape over the edges of raised vegetable beds or as the border of a path. Plant a drift of large vanilla flowered marigolds to set off other pink, purple, or red showstoppers. Or just put a lovely stripped version in a flower pot to add some sunny notes to your windowsill. Marigolds size, shape, color variety and ease of growth make them more than a boring work horse for your garden. They open up the possibility of beautiful base flowers for the entire summer, so you can focus on more finicky flowers and vegetables.

7 thoughts on “Grow Marigolds! They Are Awesome!”